Congratulations to Zaynab Abdi, Our 2017 STEP-UP Achieve Alum of the Year

This remarkable Wellstone International High School grad is a student at St. Catherine University and a representative for The Malala Fund 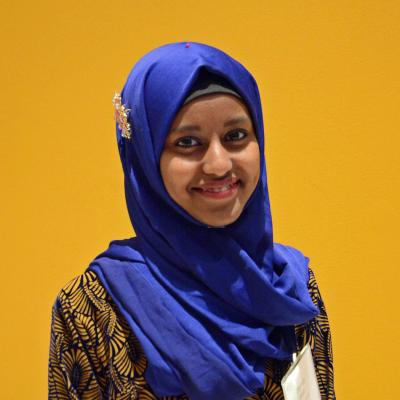 Zaynab Abdi is one of over 20,000 young people who have participated in the City of Minneapolis STEP-UP youth employment program, managed in partnership with AchieveMpls. In recognition of her outstanding accomplishments, Zaynab received the 2017 STEP-UP Achieve Alum of the Year Award at our February STEP-UP Achieve Partners Breakfast. Here's our tribute to Zaynab at our event.

STEP-UP has been a part of many inspiring stories. Yet few leave you in awe like Zaynab Abdi's story.

Growing up, life was a whirlwind for Zaynab, to put it mildly. By age 17 her family had fled conflicts in Somalia, Yemen and Egypt.  “I started to think conflict was following me everywhere I went,” she says.

In the just over two years since Zaynab arrived in the United States as a refugee, she herself has been a whirlwind.

Zaynab enrolled at Wellstone International High School just two days after landing in Minnesota and barely speaking a word of English. She'd already missed two years of school and knew she couldn’t waste any time. By the time she graduated in 2016, she had a 4.0 GPA and was captain of her soccer team.

At Wellstone, one of her strongest supporters was Chris Stoltenberg, our Career & College Center Coordinator at the school. Chris helped Zaynab research careers and colleges and and adapt to life in America. He also helped her apply for the STEP-UP program.

Through STEP-UP Achieve, Zaynab found a great internship at the Twin Cities law firm Meyer & Njus. There she got a first-hand look at what it's like to be a lawyer by assisting attorneys and other staff with a wide variety of tasks and projects, including data management.

Zaynab also participated in the week-long Summer Legal Institute organized by Just the Beginning - A Pipeline Organization in partnership with STEP-UP Achieve. The Institute connects interns who are interested in legal careers with an intensive opportunity to learn about the American legal system, visit local law firms, meet in-house counsel at local corporations and participate in a mock trial with a federal judge. True to form, Zaynab - one of the Institute's top participants - served as one of the three attorneys for the mock trial,

Zaynab performed so well at Meyer & Njus that she was invited to stay beyond her summer internship and into the academic year. She ended up working at the firm for a year-and-a-half before enrolling at St. Catherine University, where she’s now studying political science and international relations.

Zaynab says her STEP-UP Achieve experience inspired her to pursue a career as a human rights attorney. "STEP-UP Achieve is not just a chance to work," she says. "It’s a path to find your career. It’s an amazing experience. You learn new jobs. You learn what’s going to work for you.”

STEP-UP Achieve also introduced Zaynab to networking, business cards and shaking hands - skills that came in handy as the world was starting to take note of this dynamic young woman.

And when Nobel Peace Prize laureate Malala Yousafzai came to the Twin Cities in July 2016 to speak to a massive crowd at Target Center, Zaynab was one of several young immigrant and refugee women who were invited back stage to meet her. Zaynab recalls being awestruck when she first met Malala and asking her, "Can I touch you?”

Zaynab and Malala formed an instant bond, and two years later Zaynab was invited to represent The Malala Fund at the U.N. General Assembly. Zaynab spent a week in New York speaking at U.N. events and networking with world leaders, including the U.N. Secretary General.

Zaynab credits the skills she learned as a STEP-UP Achieve intern for helping her to take full advantage of this amazing opportunity and make many meaningful connections. Since then, Zaynab's story has been featured on The Malala Fund website, and Malala spoke of Zaynab in her Facebook response to Donald Trump’s recent executive order on immigration.

For perseverance in the midst of unimaginable adversity, for maximizing her STEP-UP Achieve experience to build the foundation for an impactful career, and for serving as an ambassador for millions of immigrants and refugees around the world, we are proud to recognize Zaynab Abdi as our 2017 STEP-UP Achieve Outstanding Alumna. Congratulations, Zaynab!