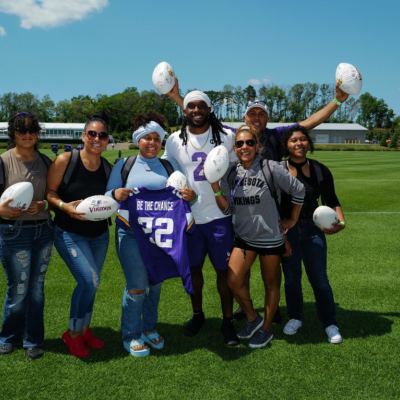 Congratulations to Elsie Carmona Quiterio, a recent graduate of Washburn High School who has received the Minnesota Vikings' second annual Be the Change George Floyd Legacy Scholarship! Elsie is beginning studies this fall at Florida Memorial University, an historically Black university in South Florida. Achieve Twin Cities partnered with the Minnesota Vikings to create this new scholarship in 2020, which is awarded each year to an African American graduating senior in Minneapolis or Saint Paul. This article originally appeared on the Minnesota Vikings website.

Elsie Carmona Quiterio knew she needed to do something.

Elsie, a Minneapolis resident, saw her community wracked with pain and turmoil following the murder of George Floyd in May 2020. She watched societal tension and violence explode – sometimes literally – through neighborhoods.

But at just 16 years old, how could she make an impact?

Elsie has a passion for writing and poetry that she never before had shared with the world. But while attending a rally at the Minneapolis Public Schools John B. Davis Education and Service Center that summer, she decided to take a step past her comfort zone.

The young lady stood tall and proud, delivering a profound speech in front of the large crowd.

"That was the first time that I ever shared anything about me to an audience, and the audience just welcomed me with such gratitude that I spoke out about things, and while being so young," Elsie recently told Vikings.com. "Everyone came up to me and was like, 'Thank you for that.' It just felt like I needed to keep on doing it."

For Elsie, writing is a way to "transcribe those words that are so jumbled in my head." She's grateful for outlet.

"It gives me something to do so I'm not keeping all of these things inside of me. Because the more that I would do that, the more that I wanted to explode," she explained. "I had so many things, so many ideas that I wanted to share with the world, and I didn't know how – so poetry helped me share what I'm feeling on the inside and kind of give it to the rest of the world."

In the two-plus years since Floyd's death at the hands of a former Minneapolis police officer, Elsie has continued to find her voice through written word and has established herself as an activist for change.

"Activism is a lot about speaking out on the things that I'm passionate about in my community and everything that comes with my upbringing in Minneapolis," she said. "Minneapolis is my home, and I see so many things on a daily basis that really hurt me and hurt my character and my identity.

"I try to take as much as I can from the experiences that I have, and I make a story out of it," Elsie added. "I create change. We create change in this generation. That's exactly what I'm doing every day."

Elsie's efforts have been widespread and well-received.

She's garnered not only the attention of her community members, young and old, but of the Minnesota Vikings Social Justice Committee, which recognized Elsie as the 2022 “Be the Change” Scholarship recipient.

Elsie was selected for the scholarship after leadership read her submitted essay. In it, she shared her passion for making the Minneapolis community a safer space and to end police brutality. In addition, she embraced and reflected on her Afro-Mexican heritage:

Before the city went into mourning, I hadn't thought about both sides of my ethnicities and how they both shaped me.

Though Elsie is saddened by aspects of the current culture, her eyes and heart convey compassion and care.

It's an empathy recognized by Vikings linebacker Eric Kendricks and running back Alexander Mattison, both of whom are part of the Vikings Social Justice Committee.

"It's always good to show love to the community, and … it's important to give back to those who are doing so much and trying to do the impossible," Kendricks said. "She's a leader in her community. The odds have been against her, but she's resilient, and she's going to be doing great things in the future. She's very self-motivated, and those are the kind of people we look for."

Kendricks can relate to Elsie in some ways.

As a naturally soft-spoken individual himself, he's found himself taking steps farther and farther outside of his comfort zone to fight for change.

"I definitely know how nerve-racking it is to be judged by your peers and put yourself out there, put your heart out there on your sleeve," Kendricks said. "But once you start doing it, like she did, you have that confidence to do whatever you want and just really believe in yourself."

Kendricks and Mattison visited with Elsie and her family following Saturday's walk-through session, and Kendricks presented her with a purple Vikings jersey bearing a custom "Be the Change" name plate.

Vikings tight end Irv Smith, Jr., quarterback Kirk Cousins and Head Coach Kevin O'Connell were among others who stopped by to sign autographs and congratulate Elsie on the scholarship.

"This gives us a boost in our work and what we're doing, and [it illustrates] that in this generation we're more about creating the change and not just talking about it," Elsie said of the Vikings support. "So that's exactly what we're doing. Seeing people start to not only give of themselves and speak out on the things [Kendricks and Mattison are] speaking out on, but also providing financial help or in other ways as much as they can, it just really helps us feel like their support.

"They're looking at us like, 'Yeah, these are the people who are going to create change.' It's very uplifting, and I'm very grateful for them," she added.

Mattison said it's meaningful to be so appreciated by Elsie – and for more than his football prowess.

"We play this game because we love it, but the careers we have and the platform that we have, we aim to use that to inspire and motivate people. For us to hear that from her … means the world," he said. "It's really an honor to able to sit back and reflect on the work that we're doing and the stuff that we're trying to accomplish in this world and in this community.

"The effect that we have by using our platform is something that we really take pride in," Mattison added.

Elsie's scholarship will go toward her education at Florida Memorial University, an HBCU college in Miami Gardens that she'll attend this fall.

Elsie plans to look into writing classes and potentially pursue a writing-focused degree.

"I know that's one of the things I want to be part of my future," she said. "I definitely want to keep doing what I'm doing in my community and taking that with me wherever I go."

Below is a poem written by Elsie and included in her original essay submission for the scholarship.

Learn to fly, the wind is strong but we are stronger,

The skies may become gray

The lightning bolt will try to touch you,

The sky is doing exactly what it is supposed to

All of the rioters, politicians, activists, sacrificers

My brothers and sisters spread their wings, now it's our turn,

From sunrise to sunset

The cotton grew and slaves slouched their shoulders, their back, their feet twisted in pain

And created our movement, my movement

We were never silent, our actions will speak for where we don't have to.

They were never done living, our ancestors

As the soil gets watered, the soil waters our air, we start breathing a revelation

Our representation should come with vibrant hues that our history left us to put together From the first Afro-Latinas claiming their presence in the border states before English settlers, my people were murdered the chance to connect to their roots

Endured cruelty in horrible conditions, and repeated the cycle twice when Africans were brought by the English

Our presence in both groups will change

They will put their hands together and lift us up

Black women are denied holding a child, serving a traffic violation, sleeping at home with a loved one, or playing a video game

Our black men were killed for it

Murdered for protecting our black women

our flowers grew from the roots and expanded the African diaspora so that we could be watered and nourished with love, acceptance, and representation

I'm your next black woman, your next Afro-Latina activist, actor, advocate

I use my colored words, body, and spirit to spread my poetry and speeches, that is how I hold my space in my community.

This article originally appeared on the Minnesota Vikings website.